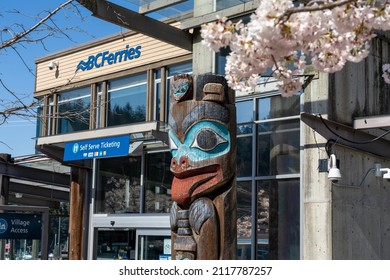 Restoration of the Ferry Building

A major renovation of the Ferry Building in West Vancouver will see it raised and relocated. In addition to the elevation change, improvements will be made to the building’s envelope and seismic system. There will also be accessibility improvements, including accessible washrooms. When the work is completed, the Ferry Building will continue to operate as a community art gallery.

The Ferry Building is one of the oldest buildings in West Vancouver. It is the hub of arts and culture in the community. It hosts up to 18 exhibitions each year and more than 500 visitors each week. There are currently two exhibits on display in the Ferry Building. The renovation is expected to be complete by the end of 2022.

West Vancouver is home to many parks and recreational areas. Cypress Provincial Park, which is located within the West Vancouver municipal area, was one of the venues for the 2010 Winter Olympics. The community is also home to Canada‘s first mall, Park Royal Shopping Centre. It also contains the ferry terminal, which is a major connecting hub in the region.

The restoration will also include the Navvy Jack House, one of the oldest continuously occupied homes in the lower mainland. It shares its history with both First Nations and European settlers. It will be restored to its original 800-square-foot footprint. In addition to the renovation, the Navvy Jack House will become a Cottage Coffee shop.

Exhibitions of work by emerging and established artists

The Ferry Building West Vancouver is host to a variety of exhibitions by established and emerging artists. Current exhibitions include the Richmond Art Gallery, which presents a new body of work by senior BC photographer Jim Breukelman, whose photographs evoke a sense of space and compositional integrity. Other artists in the building’s rotating program include Michelle Allard, whose work is informed by irregular patterns and complex morphology.

The Ferry Building Gallery is a public community gallery operated by the District of West Vancouver. The gallery features work by established and emerging artists and offers tours and lectures that reflect the cultural diversity of the city. Its mission is to foster the development of artists in the region, with an emphasis on the North Shore. The gallery is open to the public and hosts over 500 visitors each week.

The work of emerging and established artists at the Ferry Building West Vancouver ranges from abstract and figurative works to video installations. Several works by local and international artists are featured at the gallery. In addition to the curated exhibitions, the Ferry Building West Vancouver also hosts a series of artist talks and other events. The exhibitions are free to attend and open to the public.

Several emerging and established artists are showing new works this year. In addition to contemporary Canadian artists, the exhibitions will feature a selection of internationally known artists. The upcoming exhibitions include the Richmond Art Gallery’s International Mail Art Swap and the Vancouver Art Gallery’s own exhibition of original works by Vancouver-based artist Karilynn Ming Ho. Initially, she was a drummer and a trained actor before moving into hand building and clay work. Later, she landed on painting as her favourite form of expression. Her paintings are large and mixed-media works, and are inspired by shapes and textures.

The Vancouver art scene is thriving, with artists and events ranging from contemporary art to photography to interactive art. The city’s art venues are as diverse as the artists themselves. From university campuses to smaller galleries, there’s something for everyone.

A major project underway in West Vancouver will raise the Ferry Building five feet above current flood levels. The project is a partnership between the federal and provincial governments. The federal government is providing $1,010,360, and the provincial government is contributing $841,882 toward the project. The project would also include seismic upgrades, washroom renovations, and accessibility improvements. When completed, the building would continue to serve as a community art gallery.

Rising sea levels are a result of climate change and will present a number of challenges to coastal communities. The BC government is working with partners to plan for sea level rise and has issued guidelines to help coastal communities prepare. The province’s guidelines suggest four strategies to address the issues. These strategies include avoiding construction in at-risk areas, modifying existing infrastructure, and protecting buildings and structures. While there are still many questions about the best approach, some strategies are already in place. For example, Vancouver has amended its building statute to raise buildings that are vulnerable to flooding.

While the restoration work is expected to start this week, the closure of Argyle Avenue will result in the closure of eight parking spaces. The road will be closed between 14th and 15th streets to allow work on the Ferry Building Gallery. During this phase, traffic and pedestrian disruptions will occur, and motorists should be prepared for intermittent delays.

The District of West Vancouver has also prepared an Integrated Stormwater Management Plan to address the flood issues. This plan aims to protect the existing neighbourhood as well as those being built in the future. It calls for a stormwater pipe to run through the city from the Upper Levels Highway to Burrard Inlet, with intake structures to capture base flows during heavy rainstorms.

Artists from the North Shore of Vancouver

The gallery is a beautifully restored heritage building and is home to over 1000 people each week. The art collection includes work by established and emerging artists from the North Shore. The gallery is run by a volunteer board and all of the artists involved are local residents. Throughout the exhibition, you can expect to see works of all mediums.

The exhibition also features the work of French artist Sandrine Pelissier. This North Shore resident has been painting full-time since 2003. She has won several awards for her work and is an active member of the North Shore Artists Guild. She started with watercolour but has since moved on to oil and acrylic. Her work is represented in many private and corporate collections around the world.

The exhibition will also feature the work of local artist Anne McLean. This artist was recently awarded the Don S. Williams Grant by the Fund for the Arts on the North Shore, an award that recognizes artistic accomplishments and talent. She has also been chosen for the Harmony Arts Festival in 2012. Anne McLean lives and paints in North Vancouver and travels extensively. Her paintings portray the beauty of nature and are full of vibrant colours and innate design.

Before the ferry depot, the North Shore of Vancouver’s sloped landscape was home to the North Shore Ferry Company and was a bus depot until it closed in 1986. After the opening of the Lions Gate Bridge, ferry service was ceased. Despite its history, it was saved from demolition by concerned citizens. After extensive restorations, the Ferry Building was re-opened to the community as a gallery in 1989.

Funding for the project

The District of West Vancouver has recently announced that it has received funding from the provincial and federal governments to raise the Ferry Building, an iconic landmark located in downtown West Vancouver. The project will raise the building approximately five feet, resulting in an accessible building. The project will also improve building and seismic systems. Accessible washrooms will also be added to the west side of the building. Once completed, the Ferry Building will be open to the public as a community art gallery.

The funding for the project comes from an additional budget, the West Vancouver Asset Levy. Council increased this fund in 2016 and has allocated $16.4 million annually since then as part of the district’s strategy to address failing assets. The West Vancouver Asset Levy is expected to provide more than $10.3 million annually for the next 20 years, and the preliminary capital budget for 2022 indicates that $17.8 million of that funding will go towards asset management plans.

The Ferry Building Gallery is a community gallery operated by the District of West Vancouver. It hosts up to 18 exhibitions each year, attracting up to 500 visitors each week. Located in the heart of Ambleside Landing, the Ferry Building is an essential part of West Vancouver’s arts and cultural scene. While funded by the district, the gallery earns commissions from sales of art and donations from patrons.

The federal government has included $101.4 billion in recovery spending in the budget that is currently being debated in the House of Commons. One of the federal priorities is funding a second ferry. Another priority is funding infrastructure upgrades at Langdale.