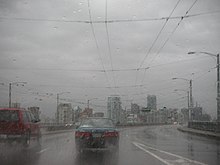 West Vancouver‘s typical climate has a range of temperatures and precipitation. The average temperatures vary from mid-January to late August. However, the snowiest and coldest periods are typically late December and early January. The rest of the year has a relatively mild climate with near-normal temperatures and rain.

The average daily temperature in December is -6 degC (21.5 degrees Fahrenheit). The warmest days are at least 15 degrees Celsius. The mean monthly minimum temperature is a cool seven degC (21 degrees Fahrenheit). In December, there are 20 days with measurable precipitation of 160 mm (6.3 in). The length of the day is eight hours and 20 minutes. The shortest day of the year falls on December 21. The sun is out only 2 hours of the day. The average humidity is 86 percent.

The summers are cool and sunny with maximum temperatures varying between 20 and 23 degC. The Pacific high-pressure system ensures longer periods of pleasant weather. This makes Vancouver one of the sunniest and coolest large cities in Canada. The west side of Vancouver Island experiences a cooler climate than the rest of the city.

The chart below shows the typical weather conditions of West Vancouver in wind speed units. The data is updated hourly and is available for 30 years. It is free to use, and you can download variables in CSV format. The graph also displays average daily maximum and minimum temperatures. You can also see averages of the hottest and coldest days of the month. Although wind speeds are not displayed by default, you can toggle them on or off by selecting the checkbox at the bottom of the graph.

The topography of the city is relatively flat, with an elevation change of only 417 feet over a 10-mile area. The average elevation is 197 feet. However, there are some significant variations in elevation within a 50-mile radius. For example, the area within two miles of Vancouver is 100% covered by trees, and the area within 50 miles is mostly covered by water.

Reference wind speeds used in the NBC 2015 Code are based on the one-hour average of wind speed in 10 meters of height over open terrain. These are based on long-term wind records at large numbers of weather stations in Canada.

Days with frost in West Vancouver, BC usually happen when the daytime temperatures begin to dip and are above the freezing point. The risk of frost increases every day as the growing season winds down. Usually, by the end of June, most people have experienced at least one frost event.

Vancouver’s climate is mild compared to the rest of Canada. During the cooler months, the average daily high temperature is less than 50 degrees Celsius. However, the coldest nights are at the end of the month, when the temperatures can drop to -12 degrees. In November 2006, the average low temperature was only -11.4 degrees Fahrenheit. In contrast, the hottest days of the month are often over 20 degrees.

During the spring and autumn, frost dates can vary by season. The last average frost date is March 28, while the first frost date in fall is November 2. These dates are not exact, and can vary dramatically from year to year.

The rainfall tables for West Vancouver BC show average annual precipitation in millimetres and hours. They also show the average number of days with rain and snow. The average amount of rainfall for any given month is based on statistical data collected from 1981 to 2010. The maps also show the normal yearly amounts of precipitation, which includes days with at least 0.2 millimetres of rain.

Vancouver has a temperate oceanic climate. The city’s climate is mild, with moderate winters and cool summers. The area is protected by the nearby mountains and is warmed by Pacific Ocean currents. Vancouver has relatively few snowfalls throughout the year, although nearby mountains typically have snow from November to May. Despite this, Vancouver has cool summers with average temperatures ranging between 2 degrees Celsius. The city receives the largest amount of rain between October and March.

In West Vancouver BC, temperatures range from warm to cool. The warmest period is mid-July to late-August. The average high is 68degF and the low is 57degF. The coolest month is January, when average temperatures fall below 45degF.

The calmest month to visit West Vancouver is in September. The weather is usually pleasant with some rain, but not enough to spoil your outdoor plans. You can also score some great hotel deals during this time. There are a few things to consider when booking your accommodation during the quietest month in West Vancouver:

During the month of September, temperatures range from 18 C to 64 F. During this time, there is usually 63 mm of rain, which is about 2.5 inches of rainfall. Most of this rain occurs near the end of the month or just before October, which is the start of Vancouver’s six-month rainy season.

In February, the city welcomes the Chinese New Year with a dragon parade, fireworks and other festivities. For those looking for more excitement, the city also celebrates a monthlong Cherry Blossom Festival. The celebration includes a concert, tree talks, and a Japanese-style fair.

Snowfall is one of the most common forms of precipitation in West Vancouver BC, but the amount of snowfall you can expect varies from month to month. Typically, the deepest snow falls in December, making it the perfect time to ski in West Vancouver. The most common times to see a high level of snow cover are around December 3rd. Occasionally, the city can see a ‘0’ snow value, which is not necessarily an indication of a lack of snow, but simply an unreported lack of snow. The weather in West Vancouver is relatively temperate, with some very hot and humid months. The driest month is July, while the wettest month is January.

January is the first month of winter in West Vancouver, with temperatures that are slightly warmer than in December, although temperatures rarely drop below freezing. Highs in December hover around 41.5 degrees Fahrenheit and lows around 36 degrees. December typically receives at least 1.8 days of snowfall, which can accumulate to a depth of 2.05 inches.

The windiest months in West Vancouver are March and December. Wind speeds average 2.4 knots, which is about 2.7 miles per hour. Wind speeds are generally light, with only three days in a calendar year that experience at least 5 cm of new snow.